The Creme Egg Trifle Is Back In Time For Easter

Netflix Announces Documentary On Vanishing At The Cecil Hotel

Gordon Ramsay has worked long and hard to build his reputation as one of the most savage and discerning of chefs.

If he isn't jamming your head between two slices of bread and calling you an 'idiot sandwich' he's most likely rinsing your culinary creations on Twitter, or even TikTok - his latest venture.

But fans relished the opportunity to roast him back recently after he posted a picture of the new fry up he'd be serving at his restaurant in the Savoy Hotel in London, which costs a whopping £19.

Now, we know what you're thinking...a full english has to be pretty extraordinary for that price, surely Gordon has some culinary tricks up his sleeve - perhaps saffron dusted eggs or gold encrusted bacon?!

People Are Making Breakfast Pizza And You Need To Try It

Ross Kemp Is Getting Savaged Over His 'Detox Dinner'

But, no. It turns out he's simply offering two fried eggs, bacon, one lonely sausage, half a tomato and a single mushroom, topped with a couple of sprigs of rocket.

Gordon posted a shot the dish on Twitter, writing: "The most amazing Full English.... can't wait for you to try it from 21st September at Savoy Grill!"

And it took mere minutes for a follower to pull up the Savoy menu, and spill that the brekky cost almost 20 quid.

Meanwhile, another teased: "Poor effort. Eggs need a bit of lacing, no beans or black pudding and the single sausage looks forlorn on his own."

Referencing the rocket, they added: "I don't even want to know what that green thing is. 3/10. You ought to put this in the Fry Up Police group for some advice on where you are going wrong." 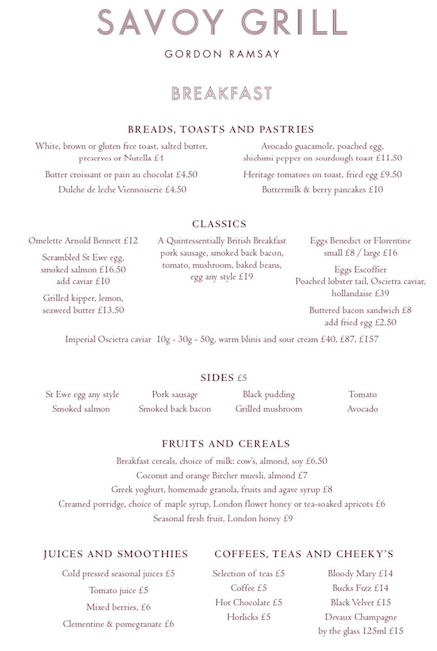 A third wrote: "Where is the black pudding? And the fried bread? You call that a breakfast? I have seen better from a roadside burger van".

For an extra £5 you can add black pudding, another pork sausage, a mushroom, tomato or egg. But we don't even want to think about how 'spenny the whole thing will be then...

"Never mind the £19. Add an extra tenner for a second sausage and a slice of pudding, a fiver for your coffee, £2 cover and 15% gratuity added to the bill as well. You're in or around £42," wrote another disgruntled follower.

Of course some people tried to say that customers were paying for the 'Savoy experience' - you know, given that it's a five star hotel, and all.

But if it means we get some beans, we'd rather a 'Spoons fry up any day!

Lockdown Love: Why There’s No Such Thing As Coming On Too Strong

Maya Jama To Host BBC's Glow Up: Britain’s Next Make Up Star As Stacey Dooley Steps Down

Netflix Announces Documentary On Vanishing At The Cecil Hotel

Disenchanted: Patrick Dempsey Confirms He Is Returning For Enchanted Sequel

Joanna is a journalist at Tyla with a particular interest in highlighting women's issues and telling inspiring first person stories. She's also their resident foodie, and loves covering exciting new beauty launches, too. Contact her at [email protected]