​People Are Calling 'Killer Inside: The Mind of Aaron Hernandez' So 'Crazy' And 'Dark'

Everyone knows that wearing black to a wedding is basically a cardinal sin, but do those rules really apply when you're a member of the royal family?

Not according to Meghan Markle, who stuck a middle-finger at the archaic rule with her 'controversial' outfit choice at the weekend.

The Duchess of Sussex joined her husband, Prince Harry at the wedding of Charlie van Straubenzee and Daisy Minks, where Harry performed his best man duties. 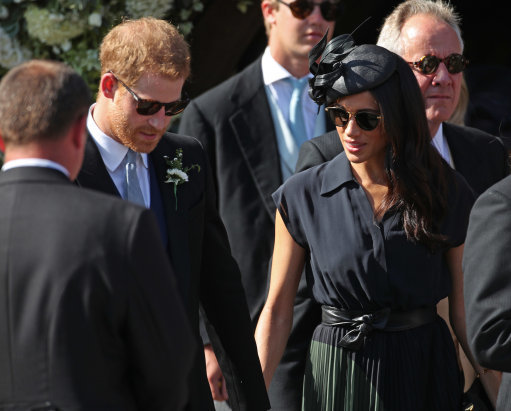 However, instead of opting for a pastel, summer dress - as you might expect, the new royal threw the rule book out the window by opting for a black dress instead.

But Meghan's outfit choice sparked furious debate on Twitter, with some users branding the royal as 'attention seeking.

One furious Twitter user wrote: "WHO wears black to a wedding with her top buttons undone showing a racy bra? Narcissist attention seeking Meghan Markle, she just can't stop herself can she?"

A second joked: "So there wasn't a death?"

"Why is she wearing black to a wedding?! She has no style," a third fumed.

However, others defended the former Suits star, pointing out that she has the right to wear whatever the heck she wants.

"You can wear whatever colour you want. I just attended my Brother In Law's wedding in London and many guest including me wore black," one person tweeted.

Others argued that Meghan's muted colours could've been her way of avoiding attention and not upstaging the bride.

"I'm not in love with this look, but it must be difficult trying to balance not upstaging the bride with still being publicly pleasing," one Twitter user defended.

Too Much Sleep Can Give You A Stroke, According To Study

Tesco Is Selling A Massive Family Sized Jaffa Cake For £1